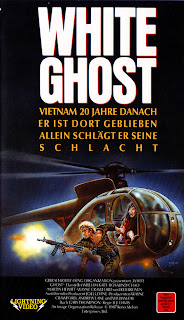 White Ghost
N° : 77067
Year : 1989
Country : Germany
Running time : 83 minutes
Actors : William Kat, Rosalind Chao, Martin Hewitt, Wayne Crawford
Director : B.J. Davis
Story : When the American soldiers went home from Viet Nam (that's how they spell it) in 1969, not everyone got out in time. The highly skilled soldier Steve Shepard aka "White Ghost" (William Katt) has lived out in the jungle for 15 years, and has even made a nice tree-house for himself and his Asian girlfriend Thi (Rosalind Chao), who is pregnant with his child. After all this time, the Americans discover that he's still out there, and decide to send out a team of mercenaries to finally rescue him and learn what he knows from his stay in the jungle for all those years - he had gathered a large amount of dead American soldier's dog-tags, and now their families will finally know what happened to their missing relatives. But something goes wrong, and the commanding officer Major Cross (Reb Brown) unfortunately sends off a team led by a grudge-holding scumbag, Captain Walker (Wayne Crawford), who doesn't intend to get Shepard back alive. Now it is up to Cross to get him out of there himself, and up to Shepard to both keep himself and his girlfriend alive, not only from the evil gang of mercenaries, but also from the equally evil Vietnamese soldiers who are right on their tails.
Released in Germany by Lightning Video
Belgium / Netherlands release here : White Ghost
Thanks to VHS Wasteland for let me use this scan
Posted by Dan at 7:09 AM