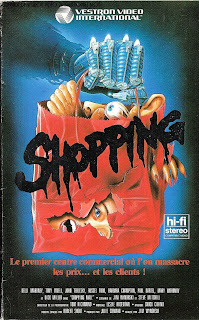 Shopping
Aka :Choping Mall, KillBots,
N° : 65169
Year : 1988
Country : France
Running time : 74 minutes
Actors : Kelly Maroney, Tony O' Dell, John Terlesky, Russel Todd
Director : Jim Wynorski
Story : A group of teenagers that work at the mall all get together for a late night party in one of the stores. When the mall goes on lock down before they can get out, The robot security system activates after a malfunction and goes on a killing spree. One by one the three bots try to rid the mall of the "Intruders". The only weapons the kids can use are the supplies in other stores. Or...if they can make it till morning when the mall opens back up
Belgian & The Netherlands release & Swedish release of this film here : Killbots
Posted by Dan at 12:43 AM