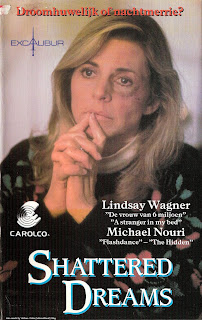 Schattered Dreams
N° : 10953
Year : 1991
Running time : 90 minutes
Country : Belgium & The Netherlands
Actors : Lindsay Wagner, Michael Nouri, James Karen
Director : Robert Iscove
Story : Charlotte marries John. Things seem ok; John has a good job and he's going up in the world, working for the government. But every so often he loses his temper and Charlotte gets the brunt of his anger. During the 18 year course of their marriage, there are at least 8 incidents of physical abuse and countless of mental. Charlotte's family and friends tell her to leave John but she keeps going back, most likely because he has convinced her that she would be nothing without him. It finally explodes in a big divorce battle balancing on the cases of abuse.
Posted by Dan at 11:56 PM