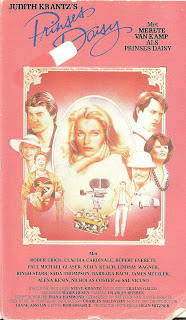 Princess Daisy
N° : 53102 / Ves 3102
Year : 1985
Running time : 180 minutes
Country : Belgium & The Netherlands
Actors : Merete Van Kamp, Rober Urich, Claudia Cardinale, Rupert Everett, Lindsay Wagner, Barbara Bach, Sal Vicuso, Alexa Kenin
Director : Waris Husen
Story : Daisy Valensky's parents were a Russian Prince and an American actress. Her parents has whirlwind romance, and were expecting twins. However, when one of them was born retarded, the Prince feeling that the retarded child should be forgotten, tells his wife that she died. However, the maid tells her the truth so she runs away to America with both children, and refuses to see her husband unless he is willing to acknowledge both of their children. When she dies, the girls are sent back to their father in Europe but he again places his retarded child in an institution. Her father dies when she is 16 and lives with her father's mistress, Anabelle. However, her half-brother develops an unhealthy obsession for her; he then molests her. Anabelle then decides to send Daisy to America. When all of her inheritance is gone she goes to work at an ad agency and has a relationship with her boss, North. Later an American tycoon, Patrick Shannon decides to make her a spokesperson and a relationship develops. However, Ram's obsession for her still continues (Source IMDB written by RCS 0411)
Posted by Dan at 2:09 AM