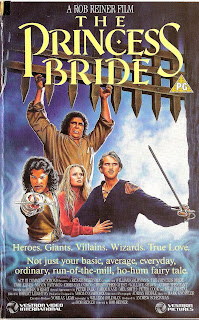 The Princess Bride
N° : Va 16949
Country :UK
Year : 1988
Running time : 93 minutes
Actors : Peter Falk, Billy Chrystal, Chris Sarrandon, Cary Elwes, Mandy Patinkin
Director : Rob Reiner
Story : A kindly grandfather sits down with his grandson and reads him a bedtime story. The story is one that has been passed down through from father to son for generations. As the grandfather reads the story, the action comes alive. The story is a classic tale of love and adventure as the beautiful Buttercup is kidnapped and held against her will in order to marry the odious Prince Humperdinck, and Westley (her childhood beau, now returned as the Dread Pirate Roberts) attempts to save her. On the way he meets an accomplished swordsman and a huge, super strong giant, both of whom become his companions in his quest. They meet a few bad guys along the way to rescue Buttercup.
More Princess Bride (the) Belgian & Dutch sleeve
Posted by Dan at 10:46 AM