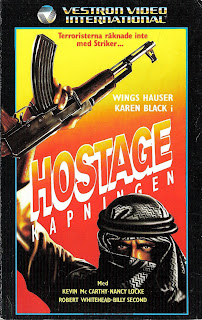 Hostage
N° : S267072
Year : 1988
Country : Sweden
Running time : 98 minutes
Actors : Wings Hauser, Karen Black, Kevin McCarthy, Nancy Locke
Director : Hanro Mohr & Percival Rubens
Story : The leader of a South African Nation is imprisoned. His followers, led by Zabo, hijack a plane with the intent to use the passengers as hostages to trade for his release. They select a plane carrying a religious leader to use as their main hostage. They soon learn that they have an added bonus of the daughter and grandson of Colonel Shaw, a bigwig in the country. The grandson all the while has to cope with the dual problems of being hijacked and held hostage while needing a kidney transplant. The hijackers have everything in their favor, except that the colonel's daughter is the sweetheart of Major Sam Striker. Striker puts together a band of mercenaries and sets about freeing the hostages
Belgian/ Netherlands version of Hostage here
Posted by Dan at 12:29 AM