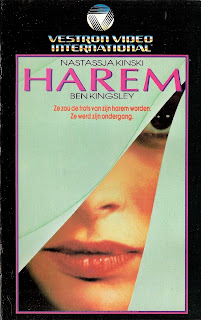 Harem
N° : 56674
Year : 1987
Running time : 113 minutes
Country : Belgium & The Netherlands
Actors : Nastassja Kinski, Ben Kingsley, Dennis Goldson, Zohra Segal, Michel Robin
Director : Arthur Joffe
Story : A young American woman is kidnapped by an Arabian sheik and held captive in his harem. At first she frantically tries to escape, but as they slowly get to know and appreciate each other the difference between captor and captive dissolves.
Posted by Dan at 11:46 PM