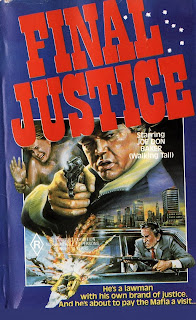 Final Justice
N° :25100
Release : 1986
Country : Australia
Running time : 90 minutes
Actors : Joe Don Baker, Helna Abella, Patrizia Pellegrino, Venantino Vennantini
Director : Greydon Clark
Story : Geronimo is the Sheriff of a little Texas town. One night two brothers from Palermo kills the sheriffs coworker and pal so he chases them. The chase takes him across the border down to Mexico where he kills one of the brothers and takes the other one back to USA to stand trial. The surviving brother vows revenge on the sheriff. But the criminal is handed over to the Italian police and the sheriff is sent over to Europe with the prisoner.
Thanks to fletchanator from The Barbaric Bs of Schlocky Cree blog to use this scan
More Final Justice here : Final Justice
Posted by Dan at 10:35 AM