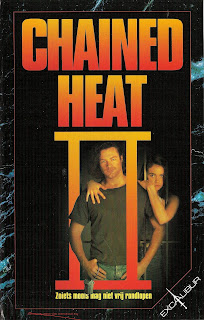 Chained Heat II
Aka : Caged Fear
N° : 13021
Year : 1992
Country : Belgium & The Netherlands
Actors : David Keith, Deborah May, Ray Sharkey, Loretta Devine
Director : Robert Houston
Story : After a jewelry theft Tommy Lane can hardly free. His girlfriend Kristen has less luck and is arrested. She's sentenced to jail in an ill-reputed female prison in Oklahoma. Tommy doesn't let her down; he manages to get into the prison - on the other side of the bars - to force the ruthless director to let her go. (Source IMDB , written by Tom Zoemer)
Posted by Dan at 12:12 AM