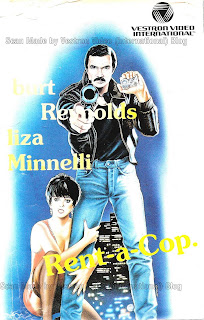 Actors : Liza Minnelli, Burt Reynolds, Dionne Warwick
Director : Jerry London
story : When call-girl Della (Liza Minnelli) gets caught in the middle of a drug bust at a hotel where she was meeting a trick, she is held hostage by a robber that busted in on the drug agents and the drug dealers. She gets rescued by vice cop Church (Burt Reynolds) who is accused of staging the aborted bust. Ex-ballplayer turned drug dealer Roger (Richard Masur) is in tight with corrupt vice cops and their superiors And the fireworks start popping

This is a Preview tape only with a Vestron sleeve. Only Belgium release/ the actual distribution went to Belga films, & in the Netherlands by R.C.V. . I think that France & the french part of Belgium was a Vestron Release , not 100% sure
Posted by Dan at 3:54 AM