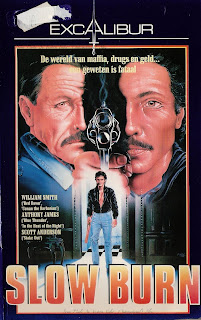 Slow Burn
N° : 10048
Year : 15-06-1990
Running time : 90 minutes
Actors : William Smith, Anthony James; Scott Anderson, Ivan Rogers
Director : John Eyres
Story : A veteran cop is after a Mafia hitman, who killed his partner. Unbeknownst to him, a rookie cop has gone undercover to also catch the hitman, who murdered his parents. In order to get close to the hitman, the rookie has cozied up to the hitman's boss, who is in the middle of a gang war with a rival Chinese mob.
Posted by Dan at 6:52 AM