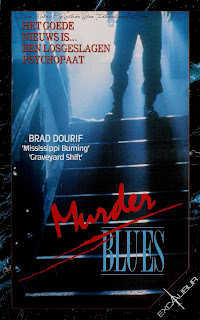 Murder Blues
N° : 13019
Year : 1992
Country : Belgium & The Netherlands
Running time : 93 minutes
Actors : Brad Dourif, Francesco Quinn, Karen Russel, Jonathan Grinner
Director : Anders Palm
Story : A detective (Francesco Quinn) becomes obsessed with bringing a man (Brad Dourif) to justice, whom he is sure is a serial killer and the murderer of a woman with which both men were involved. However, the supposed killer may be as much a victim as the murdered people.
Posted by Dan at 12:02 PM