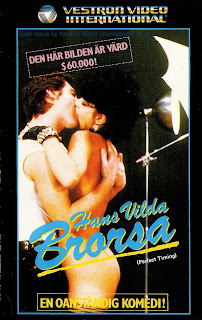 Hans Vilda Brorsa
( Perfect Timing)
N° : S 266779
Country : Sweden
Year : 1987
Running time : 85 minutes
Actors : Michele Scarabeli ,Stephen Markle, Paul Boretski, Nancy Cser
Director : René Bonnière
Story : Author: rlcsljo from Hollywood, ca wrote on IMDB
For a long time it seemed like all the good Canadian actors had headed south of the border and (I guessed) all the second rank ones filled the top slots and that left the dregs for the sex comedies.This film was a real surprise: despite the outlandish plots that are typical of farces, the actors seemed to be trying to put something into their characters and what we, the viewer, got back was almost true suspension of belief. When the extras from the music video attacked the evicting police, you almost believed it was possible.If you are a fan of some of the better sex farces (Canadian or not) you should definitely seek this one out. And the big surprise, this sex farce is also loaded with some very good nudity
Belgium / Netherlands release & Videotrailer here :Perfect Timing
Posted by Dan at 12:03 AM