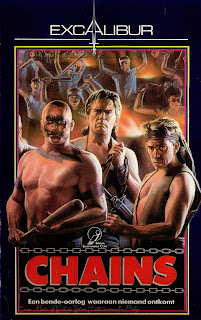 Chains
N° : 10059
Year ; 15-06-1990
Country ; Belgium & The Netherlands
Running time : 91 minutes
Actors : Jim Jourdan, Michael Dixon, John L. Eves
Director : Roger J. Barski
Story : Author: richard wilson from london, england wrote:
Now before you take the other reviews to heart and change your mind about this movie; remember that these type of films arn't for the mainstream people who demand high budget. this film is strictly low-budget, poor cast, ok - poor acting, but it does the job, and if you are in to a film where gangs are chasing yuppies through deserted gangland then i will guarantee that you will like this movie. Now to the plot; two yuppie couples are on thier way to a jazz club in chicago and in classic low budget style they decide to try and get thier quicker by taking a stupid ass detour. this is where the trouble begins as they can't find there way out. At the same time that the morons are getting lost the leader of "the chains"(the main gang)is shot dead by a rival gang member, this member happens to bump in to the lost yuppies and hitch a ride if he can guide them out of "chains territory". the only problem is that they don't know that he shot the leader of the chains gang and that now the gang is after them aswell. what follows is a good film with some decent killings, some action and some good "comedic" moments aswell. overall go and rent this film out and give it a go(but only if you like the this genre of movie. i must close by saying that this film is good but not a patch on "enemy territory" with TONY TODD, this is the best gang film ever made and if you like chains then you will love this.
Posted by Dan at 12:47 PM