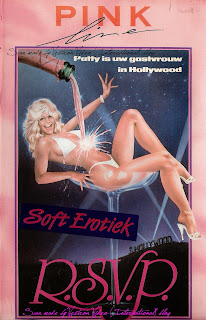 R.S.V.P
N° : 10026
Year : 1990
Country : Belgium & The Netherlands
Running time : 85 Minutes
Actors : Ray Colbert, Veronica Hart, Carey Hayes, Steve Nave, Harry Reems
Director : John & Lem Amero
Story : A group of people who were the inspiration of an author's fact-based, best-selling book are invited to a party at a mansion in the Hollywood hills to celebrate the making of the book into a movie which a series of situations, and bed-hopping begins between all persons involved.
Posted by Dan at 6:56 AM