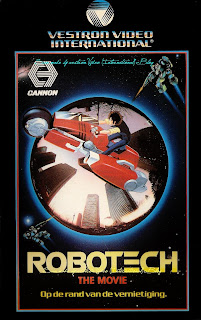 Robotech: The Movie
N° : 56655 / 86655
Year : 1988
Country : Belgium & The Netherlands
Running time : 85 minutes
Actors : /
Director : Carl Macek & Ishiguro Noburo
Story : In 1999 an alien spaceship crashed onto the earth. Hidden on board were the secrets of a unique science known as Robotechnology. Databanks found in the ship were transferred to the Earth Robotech Computer Complex. In 2009, an alien search party arrived from hyper-space to reclaim their lost databank. The united Earth Government was forced into an Inter Galactic war. Earth forces were able to win the first battle......but at a great cost. The planet was virtually destroyed. New population centres grew out of the ashes..... It is now 2027, a second armada sent by the aliens is nearing earth, they have come to recapture the secrets of their lost technology and then destroy the Earth

Video trailer uploaded by Megazone Two Three
Posted by Dan at 7:54 AM