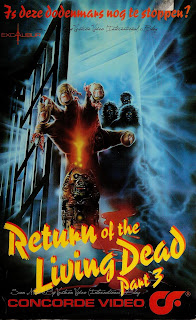 Return of the Living Dead part III
Aka : After Death ; Oltre la Morte ; Zombie Flesh eaters 3 ; Zombie 4
N° : 10113
Year :10-01-1991
Country : Belgium & The Netherlands
Running time : 90 minutes
Actors : Jeff Stryker, Candice Daly, Massimo Vanni, Jim Gaines,Don Wilson
Director : Claudio Fragasso
Story : A woman goes back to the island where her parents were killed. They had been working on a cure for cancer and accidentally raised the dead by angering a voodoo priest. With the woman is a group of mercenaries and they meet up with some other researchers. They raise the dead again and all hell breaks loose.
Posted by Dan at 8:21 AM

This is awesome because it uses the cover art for Claudio Fragasso's Zombi 4: After Death which came out 3 years after Return of the Living Dead 3!

I was not sure at first. But did my research on IMDB, and the story director & actors match with this so I guess It's the right one.