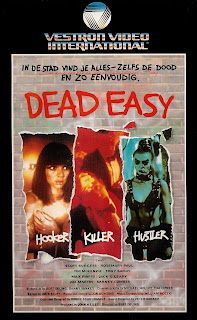 Dead Easy
N° : 52027
Year : 1985
Country : Belgium & The Netherlands
Running time : 92 minutes
Actors : Scott Burgess, Rosemary paul, Tim McKenzie
Director : Bert Deling
Story : Three young friends trying to break into the entertainment business inadvertently anger a mob boss, setting in motion a chain of events that results in their being hunted by every thug and killer in town.
Posted by Dan at 8:26 AM