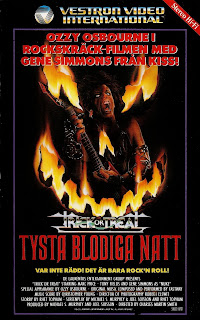 Trick or Treat
(Tysta Blodiga natt)
N° : S 264138
Country : Sweden
Year : 1987
Running time : 97 minutes
Actors : Marc Price, Ozzy Osbourne, Tony Fields, Gene Simmons
Director : Charles Martin Smith
story : Eddie Weinbauer is a typical All-American teenager, at least he was until he fell under the evil spell of Rock Music. Now he's obsessed with his heavy-metal superstar idol, Sammi Curr, who is killed in a hotel fire. Eddie becomes the recipient of the only copy of Curr's unreleased album, which when played backwards sends a message of destruction and as Halloween approaches, Eddie begins to realize this isn't only rock 'n roll... it's life and death and he must draw the line to thwart this mission

trailer uploaded by Renzino 77
Posted by Dan at 6:40 AM