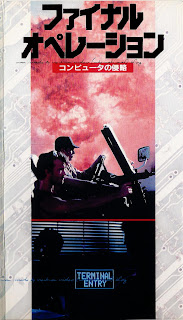 Terminal Entry
N° : V158F9354
Country : Japan
Year : 1988
Running time :98 minutes
Actors : Paul L. Smith, Yaphet Kotto, Heidi Helmer, Patrick Labyorteaux, Yvette Nipar
director : John Kincade
story : The USA are attacked by a large group of well organized terrorists who communicate through a computer network via satellite. A bunch of highschool kids has hacked the password and gained access. They believe it's a game and unknowingly cause terror acts all over the country. An anti-terror force fights against the terrorists

trailer uploaded by frenchboxing
Posted by Dan at 10:15 AM