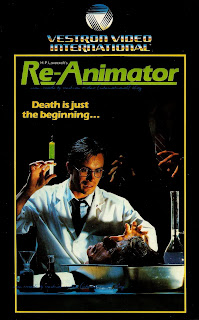 Re-Animator
N° : 55136
Country : Belgium & The Netherlands
Year : 1986
Running time : 95 minutes
Actors : Jeffrey Combs, Bruce Abbot, Barbara Crampton, David Gale
director : Stuart Gordon
story : A medical student and his girlfriend become involved in a bizarre experiment into reanimating the dead conducted by the student's incorrigible housemate in this campy sendup of an H.P. Lovecraft story. The emphasis is on humour but once the dead walk, there is gore aplenty
Second release of Re-Animator with different sleeve design original & trailer here: Re-Animator
Posted by Dan at 6:54 AM