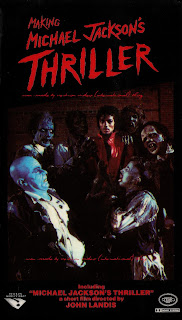 Making Michael Jackson's Thriller
N° : MA 11000
Year : 1983
Country : U.K.
Running time : 60 minutes
Actors : Michael Jackson, Rick Parker, John Landis, Vincent Price
Director : John Landis
An 80's Time Capsule, 25 February 2001 Author: Rebochan from Orlando, FL
This documentary actually tells you a lot more than just about the making of an exceptional music video. The video also captures a point in time where the world of music basically revolved around one man-Michael Jackson. One part of the documentary shows a crowd of fans gathered behind a barrier at 3 AM in the morning just to catch a glimpse of Michael Jackson (who eventually waves to them from far away). The amount of effort put into making the music video itself is astounding. This video is an interesting insight into the process of making a music video, an evolving art form when this was made. Certainly, however, if you hate Michael Jackson, you'll definitely get nothing out of this. But if you can at least tolerate him or moderately like his music, you'll appreciate the unique perspective into music that it presents. ( source IMDB)
Posted by Dan at 10:26 AM

This movie is still very hard to find in the US. An indispensable addition to my zombie archive