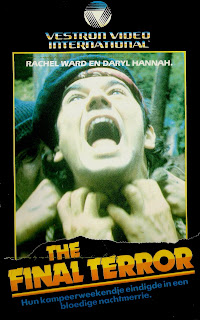 The Final Terror
N° : 55053
Year : 14-10-1987
Country : Belgium & the Netherlands
Running time : 90 minutes
Actors : John Friedrich, Daryll Hannah, Rachel Ward, Adrian Zmed, Mark Metcalf
Director : Samuel Z. Arkoff
Story : This terrifying movie takes place out in the backwoods where a group of rangers go camping. But when one of the group snaps, and leaves one by one some of the group disappears. It is left up to the rest of the group to defend themselves against this evil. With the killer disguised as the forest surroundings, one of their group held hostage, and a terrifying attack on their tour bus leaving it incapable of travel and one of them with a major injury they have to turn the tables on the killer.
Posted by Dan at 11:27 AM