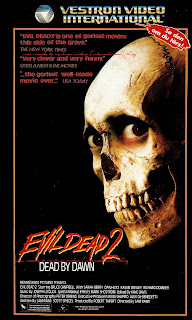 Evil Dead 2
N° : S 265212
Year : 1988
Country : Sweden
Running time : 70 minutes
Actors : Bruce Campbell, Sarah Berry, Dan Hicks, Kassie Wesley
Director : Sam Rami
Story :Ash - the sole survivor of the original 'Evil Dead' - returns with his girlfriend Linda to the remote cabin in the woods. He discovers a tape recorder that a professor had used to record incantations from the Necronomicon XMortis - the Book of the Dead. When he turns it on, the recording releases a dark, sinister force from the woods. It turns Linda into a zombie, her soul possessed by some hideous demon, and then tries to do the same to Ash. Other people come to help Ash, but one by one they are taken over by the Evil Dead force that also possesses Linda, the Professor, and the Professor's wife...and they try to make sure Ash is...Dead by Dawn!
Posted by Dan at 1:09 AM