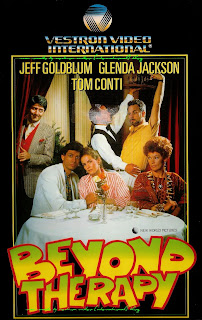 Beyond Therapy
N° : 56954 / 86954
Country : The Netherlands
Year : 1988
Running time : 91 minutes
Actors : Jeff Goldblum, Glenda Jackson, Tom Conti, Geneviève Page, Christopher Guest
Director : Robert Altman
Story : Let's go to Paris, though it could be anywhere, in any big metropolis of the end of the 20th century, or maybe the beginning of the 21st century. Let's have a bunch of people, boys and girls, men and women, all going through therapy, I mean psychoanalytical therapy, with two doctors, a man and a woman, who are the links between them all. They all are disturbed in their sexual identification not because something is wrong with them, though the women are nymphomaniac and the men are all in between straight and gay, where the two meet, exactly where the straight line bends just before breaking. That situation has been used so often by Woody Allen that we may think Altman is making a farcical parody or a fanciful remake. But you would be wrong to think so. There would have been no reason to go to Paris then. In fact the farce is a satire, a twofold double entendre satire. The satire of all the comedies we get on the big screen that try to sound dramatic and are pathetic, those melodramatic comedies that are supposed to make us both cry and laugh and often manage none or neither. That is an easy satire, the easy level of the satire. The second level is targeting the modern middle class in western societies. They have become dead, uncreative, totally obsessed by themselves, just some dead corpses perambulating in the street that we have forgotten to bury last time they opened the gates of the cemetery. At this level the satire becomes cruel with those self-satisfied baboons we call the middle class who are essentially un-occupied, in one other word idle, and they have to spend and waste their time the same way they spend and waste the money they don't even spend any energy to make. They buy some kind of trinkets for themselves that have to be expensive and time consuming though harmless and useless. That's what psychoanalysts are all about: the circulation of a lot of money in a lot of empty time that gives you the illusion of being so busy that you get giddy and dizzy. I must say it is well done but after a while it gets to shallow to really fascinate my weary eyes. ( source IMDB - Author : Dr Jacques COULARDEAU)
Only Released by Vestron Video International in the Netherlands , In Belgium it was RCV 2001
Posted by Dan at 10:35 AM

Labels: 1988, Beyond Therapy, In Collection, The Netherlands