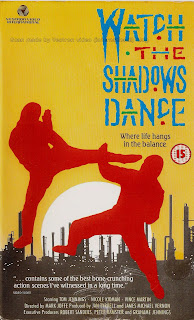 Watch The Shadows Dance
N° : VA16915
Year : 1989
Country : U.K.
Running time : 87 minutes
Actors : Nicole Kidman, Tom Jennings, Vince Martin
Director : Mark Joffe
Story : The film is set within a school where kidman and jennings are both members of what seems to be a martial arts club. They're both trained by their master who much to their dismay a drug dependent loony who in anger kills one of their fellow pupils

Swedish Artwork here ; Watch The Shadows Dance
Posted by Dan at 10:37 AM