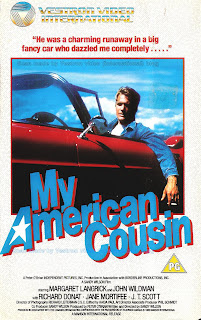 My American Cousin
N° : VA 16758
Year : 1987
Country : U.K.
Running time : 85 minutes
Actors : Margaret Langrick, John Wildman, Rihard Donat, Jane Mortifee
Director : Sandy Wilson
Story : Twelve years old Sandy lives with her parents and two younger sisters on an idyllic ranch in Canada. However she's not quite happy: her parents keep on treating her like a child. One night her cousin Buck from America arrives in a fancy car for a surprise visit. She thinks he's attractive and would like to be close with him, but he considers her too young, too. Only some time later her family learns that Buck ran away from home and took his mother's car. Sandy would like to fly with him further on...
visit videodetective.com for more info