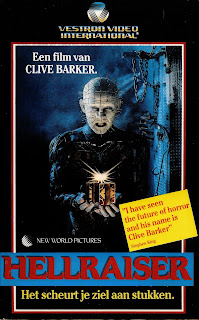 Hellraiser
N° : 57116 / 87116
Year : 06-04-1989
Country : The Netherlands
Running time : 90 minutes
Actors : Andrew Robinson, Clare Higgins, Ashley Laurence
Director : Clive Barker
Story : A man finds he is given more than he bargains for when he solves the puzzle of the Lament Configuration - a doorway to hell. But his ex-lover has found a way of bringing him back, and his niece, Kirsty Lawrence, finds herself bargaining with the Cenobites, angels to some, demons to others, whose greatest pleasure is the greatest pain.

This film is only released by Vestron Video International in The Netherlands
Posted by Dan at 12:49 AM