Death of A Soldier 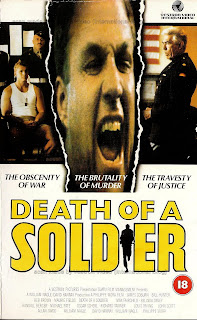 Death of A Soldier
N° : VA 16806
Year : 1987
Country : U.K.
Running time : 92 minutes
Actors : james Coburn, Bill Hunter, Reb Brown, Maurie Fields
Director : Philippe Mora
Story : Based on a true story, James Coburn portrays a military lawyer assigned to defend a confessed psychotic killer. Set in the context of WWII and the uneasy US-Australian military alliance. The accused killer claims to have killed 3 women in order to possess their voices. Despite the defense lawyer's concerns that the killer is not fit to stand trial, the US military presses forward with the case and its desire to have the killer executed in order to strengthen the shaky alliance
Posted by Dan at 5:57 AM