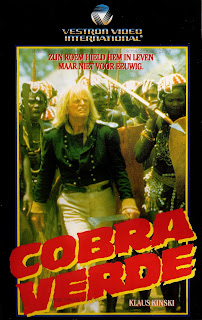 Cobra verde
N° : 57298 / 87298
year: 1989
Country : Belgium & The netherlands
Running time : 105 minutes
Actors : Klaus Kinski, King Ampaw, Jose lewgoy, Salvatore Basile
Director : Werner Herzog
Story : In the Nineteenth Century, in Bahia, the bandit Francisco Manoel da Silva aka Cobra Verde is feared and respected by the locals. He is hired by the lord Octavio Coutinho to work as henchman in one of his plantations of sugar cane, supervising the slaves and the production of sugar. When the three daughters of Octavio are pregnant of Cobra Verde, he is sent to Almeria, in the West of Africa, to negotiate slaves with the crazy African King Abomey, in times when this trade was prohibited by Great Britain. The loneliness associated to the fact of being the only white man in Almeria drives Cobra Verde to insanity.