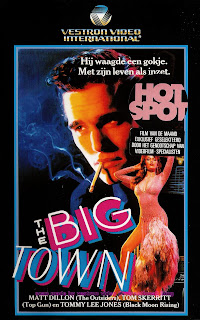 The Big Town
N° : 57144 / 87144
Year : 1988
Country : Belgium & The Netherlands
Running time : 109 minutes
Actors : matt Dillon, Diane Lane, Bruce Dern, Tommy Lee Jones
Director : Ben Bolt
Story : It is 1957. J.C. Cullen is a young man from a small town, with a talent for winning at craps, who leaves for the big city to work as a professional gambler. While there, he breaks the bank at a private craps game at the Gem Club, owned by George Cole, and falls in love with two women, one of them Cole's wife. Infuriated, Cole wagers everything on the craps table, including the Gem Club itself, and he and Cullen have it out.