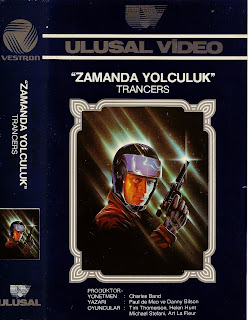 Trancers
N° : ?
Year : ?
Country : Turkey
Running Time : 76 minutes ?
Actors : Tim Thomerson, Helen Hunt, Michael Stefani,Art La Fleur
Director : Charles Band
Story: Jack Deth (Tim Thomerson) is a trooper in Angel City, circa 2247, mopping up the last of the disciples of the Martin Whistler. Whistler uses his psychic power to 'trance' those with weak minds and force them to obey his every desire. Whistler had been thought to be dead by now, but he's alive and well, and in the year 1985. Whistler's plan - to hunt down the ancestors of the City Council. With the Council disbanded, nothing is to stop Whistler from controlling the city. That's where Jack Deth fits in. Jack is sent back in time by inhabiting the body of his ancestor. The only problem is that Whistler's ancestor is a police detective, and he's begun trancing people back in 1985. With the help of Lena (Helen Hunt), a strong-minded punk rock girl, he must find and protect Hap Ashby, a former baseball pitcher now living on Skid Row, and face Whistler in a final confrontation
I found this sleeve on Fantastiksinema ( more great turkish Sleeve scans there) .
Unfortunatly I don't see a Catalogue Number & Year of release . So if someone can help me out with this , I would be very thankfull.
Posted by Dan at 1:18 AM