A Time of Destiny 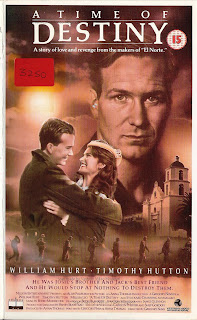 A Time of Destiny
N° : VA 17397
Year : 1989
Running time : 112 minutes
Country : U.K.
Actors : William Hurt, Timothy Hutton, Melissa Leo
Director : Gregory Nava
Story : Josie elopes with Jack against her father's wishes. Her father follows her to the hotel where they are staying and forces Josie to go with him. Jack in turn follows resulting in an accident that leaves her father dead. Marty her brother, who was despised by their father over something he did years ago, sees Jack while grieving over his father and then follows him to Europe where they were fighting the war and was about to kill Jack, when something happened that prevented him. The next thing he knows is that the two of them are being decorated, and somehow the two of them become comrades in arms but when the war ends will their friendship continue or will Marty continue what he set out to do in the beginning?
Posted by Dan at 4:46 AM