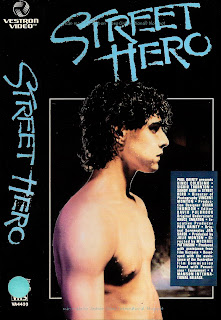 Street Hero
N° : VA 4433
Year : 1986
Running Time : 102 minutes
Country : USA
Actors : Vince Colosimo, Sigrid Thornton, Sandy Gore
Director : Michael Pattinson
Story : The story to it is about a young dude called Vinnie who does boxing in his spare time but keeps getting kicked out of school.His mother is going out with a real scumbag guy because the father died.He often beats her and Vinnie thinks hes no good for her!Vinnies mother asks him to join the school band because she thinks it will keep him busy and off the streets away from all the bad action and maybe help him with a future career!
Posted by Dan at 5:30 AM