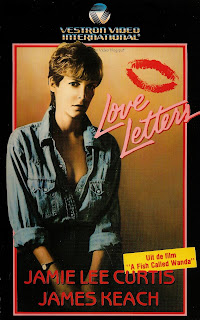 Love Letters
N° :55051 / 85051
Year : 1989
Running Time : 88 minutes
Country : Belgium & The Netherlands
Actors : Jamie Lee Curtis, James Keach, Amy Madigan, Matt Clark, Bud Cort
Director : Amy Jones
Story :A story of love and obsession. A young radio personality who, after her mother dies, discovers she had been having a love affair for 15 years. Now she finds herself recreating her mother's romance by getting involved with a married man.
- The Second release on the Vestron Video Label from 1989 Big Box. Still prefer the original artwork
Posted by Dan at 4:03 AM