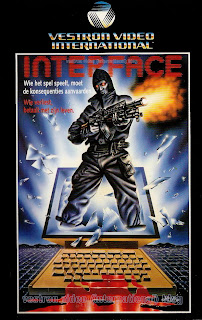 Interface
N° : 54357
Year : 21-04-1986
Country : Begium & The Netherlands
Running time : 88 minutes
Actors : John Davies, Laura Lane, Matthew Sacks, Janet Six, Arne Strand
Director : Andy Anderson
Story : On a quiet college campus, professor Hobson learns from the dean that a secret society based around hacking has been causing some trouble. Before Hobson can do much investingating, however, he learns that Bobby, one of his star students (and also an active hacker) has been killed. Although Hobson discovers that there really is a secret hacking society that has turned itself into a vigilante gang, he now has the more pressing task of proving to the police that he didn't kill Bobby himself. Will he be able to get to the bottom of this mystery before he gets thrown in jail?