A Blade In The Dark 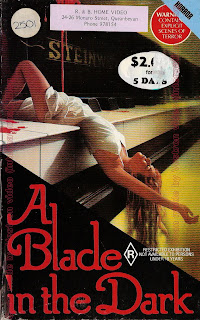 A Blade In The Dark
( La Casa Con La Scala)
N° : 79549
Year : 1986
Country : Australia
Running time : 97 minutes
Actors : Andrea Occhipinti, Anny Papa, Lara Naszinsky, Fabiola Toledo
Directed by : Lamberto Bava
Story : A music composer hires a country house to write the soundtrack for a horror B-movie. There he discovers something about a mysterious girl called Linda and suddenly people around him begin to be killed. Maybe the solution is in the final scene of the movie he's working on...

trailer uploaded by Blame2workshop
Posted by Dan at 12:16 AM