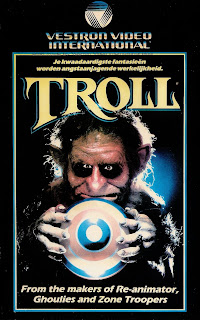 Troll
N° : 55121
Year : 1986
Country : Belgium & The Netherlands
Running time : 86 minutes
Actors : Noah Hathaway, Michael Moriarty, Shelley Hack
Director: John Buechler
story : An evil troll, Torok, the transformed state of the ex-husband of an old friendly witch named Eunice St. Clair, has chosen her apartment building to be the heart of the restoration of the world he once knew. To do this he uses an Emerald ring, and takes possession of a little girl named Wendy, whose brother Harry immediately suspects something wrong. Torok, often in the form of the little girl, goes into each occupant's apartment, hideously transforming people (beginning with Peter Dickinson, named after the author/protagonist of _The Flight of Dragons_, which explores similar themes) into plant pods
Posted by Dan at 10:08 AM