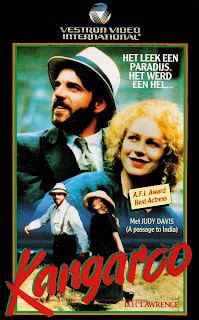 Kangaroo
N° : 57005 . 87005
Year 1989
Country : Belgium & The Netherlands
Running time : 100 minutes
Actors : Judy Davis, Colin Friels,John Walton, Peter Hehir
Director : Tim Burstall
Story : A mild-mannered English conscientious objector moves to what he feels will be the relative calm of Australia after World War I, but gets caught in the middle of violent battles between the rising trade unions and fascist groups.
This should be the Belgian / Netherlands release of Kangaroo, unfortunately I don't have it in my collection,only the promotion sleeve And as far that I can tell Vestron never released this in Belgium & the Netherlands due their bankruptcy. I only Got the UK tape of this film
Posted by Dan at 1:36 AM