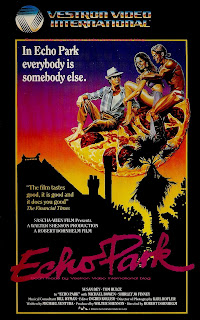 Echo Park
N° : VA 16630
Year : 1986
Country : UK
Running time : 92 minutes
Actors : Tom Hulce , Susan Dey, Michael Bowen, Shirley Jo Finney
Director : Robert Dornhelm
Story : In the Echo Park neighborhood of Los Angeles, everyone is more than they initially seem. May waits tables, raises a son, Henry, and is an aspiring actress. She needs a roommate and takes in a pizza deliverer named Jonathan, an aspiring songwriter. In the adjoining flat is August, an Austrian body sculptor who appears in a deodorant commercial and dreams big dreams. May takes a job delivering singing telegrams as a stripper, Jonathan invites Henry to tag along with him on deliveries, August gets into trouble with the police who call his father in Austria, and the friendships, frustrations, and love affairs of everyday life come to a head.
Posted by Dan at 9:50 AM